Can Anyone Stop Gonzaga In This Year's March Madness? 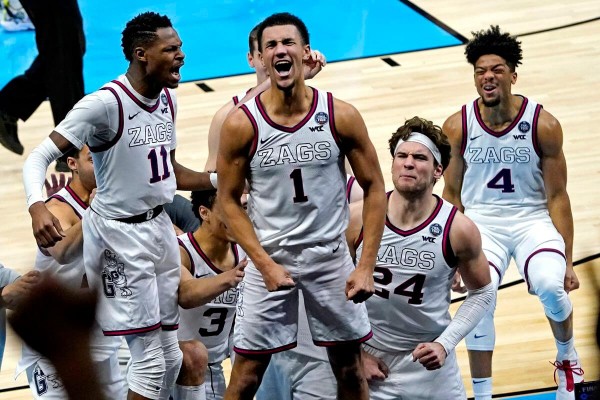 The 2022 edition of the NCAA Division I Basketball Tournament is right around the corner as the best teams in the United States prepare to compete to be crowned this season’s college champions. Better known as March Madness, this year’s tournament begins on March 13, with the final scheduled for April 4.

The early predictions and betting markets have installed the Gonzaga Bulldogs as the favorites in the March Madness betting lines to go all the way and win the title. However, there are many teams that believe they also have what it takes to become champions.

So, can anyone stop Gonzaga at March Madness and get their own hands on the trophy? Here is a look at what makes Gonzaga the early favorites and some of the other leading contenders with plans to stop the Bulldogs.

The Bulldogs are on a mission to atone for last year’s final heartbreak, where they went down 86-70 to the Baylor Bears having entered the game as the favorites and on the back of an undefeated season – the first team to do so since Indiana State back in 1979.

Gonzaga has been making a championship-winning statement all season; they sit top of the West Coast Conference and are the projected No 1 seed for March Madness. They are also led by one of the leading stars of college basketball: freshman center Chet Holmgren, who appears destined for an imminent move to the NBA.

Yet, the Bulldogs have shown to be fallible. They lost their last game by 10 points to St. Mary’s Gaels, and while they hold a strong 8-3 record against Q1 teams, it shows they can be beaten. There are also question marks over how well the West Coast Conference and its lack of deep competition can prepare a title-chasing team for the intensity of March Madness.

Make no mistake: Gonzaga Bulldogs are favorites for a reason, but there are several other teams with sights set on the trophy.

Hot on Gonzaga’s heels with the bookmakers to win March Madness are the Arizona Wildcats, who have been going well all season to top the Pac-12 Conference. Arizona’s strong form also has the team installed as the projected No 2 seed, despite also suffering a surprise defeat to Tennessee Volunteers.

Led by guard Ben Mathurin – a projected lottery pick for the NBA Draft – and new coach Tommy Lloyd, the Wildcats have enjoyed plenty of success this season with their high-intensity play that has them installed as one of the title favorites.

While the team might not be considered an all-time great, Arizona’s expected high seeding should enable a favorable draw and they have enough talent to be taken seriously at March Madness.

The defending champions looked, until recently, rank outsiders to retain the title but the Baylor Bears are finding form at just the right time as the NCAA heads towards March Madness.

At the time of writing, the Bears have won six of their last seven games, including a statement, come-from-behind victory over Kansas City Jayhawks, to move top of the Big 12 Conference.

Baylor are also able to call on two of their best players from last season’s title-winning team, and Adam Flagler and James Akinjo continue to lead the way for the Bears. The duo’s presence has allowed for some vital continuity, and this is of course a program that knows how to win titles, which will hold them in good stead under the pressure of March Madness.

After six straight wins and 13 wins in their past 14, Duke Blue Devils are making plenty of noise about their credentials as potential March Madness champions.

Sitting top of the Atlantic Coast Conference, Duke are led by the fearsome trio of NBA-bound forward Paulo Banchero, center Mark Williams, and the returning AJ Griffin, who is now showcasing his talent after a long time out with injury.

To boost Duke’s NCAA title chances, the team has fared well this season against Q1 opponents, winning five and losing just once, while the momentum the Blue Devils currently have can carry them towards a deep run during March Madness.

Possessing arguably the best player in the NCAA, the Auburn Tigers looked on track to sweep their way into March Madness and be considered one the leading contenders for the trophy.

While Auburn’s status as one of the favorites remains true, the team’s recent form is no doubt a cause for concern: they have lost three of their last six, even if all of those defeats were withing five points.

That said, the Tigers can still call on Jabari Smith Jr, the superstar freshman capable of single-handedly leading his team to victory. And with a couple of winnable games left in the regular season, Auburn will hope to build up some winning momentum before the tournament.