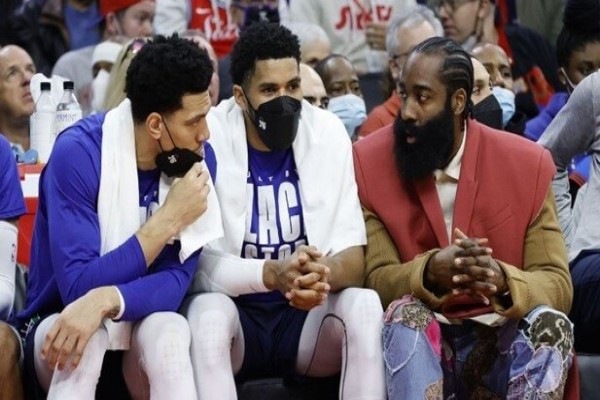 MVP frontrunner Joel Embiid has offered the Philadelphia 76ers what he believes is a winning formula.

The Sixers have had a near-perfect record on the back of the All-Star break, losing only twice. Despite all of the drama surrounding the team and their having to go without a single minute of action from the now-departed Ben Simmons, they’ve done pretty well out East.

They were hoping to get one over the Brooklyn Nets on Thursday, with Simmons having moved there in exchange for James Harden. However, Harden only posted 11 points as Kyrie Irving locked him up.

Philly suffered a blowout 29-point loss but got a chance to bounce back against the Orlando Magic, who are the bottom seed in the East. The Magic, though, did not lie down and outscored Embiid and co. 59-47 in the first half.

The Sixers shot an abysmal 34 percent from the field and an even worse 30 percent from long distance in the half but played a lot better in the second period to avoid what would have been a very disappointing loss. They could not complete the comeback in regulation and needed overtime to get the job done.

Embiid scored 35 to lead the scoring for Philly but Tobias Harris was the hero on the night, hitting a huge go-ahead bucket to seal a 116-114 win for Doc Rivers’ side.

The loss to Brooklyn was a wake-up call and it appears the 76ers still needed a bit of convincing on Sunday. Harden made up for his subdued performance with a 26-point outing that saw him pick up six rebounds and make six assists.

Of course, the Sixers will be one of the most feared teams heading into the playoffs and Pennsylvania sports betting avenues will likely be full of activity from hopeful fans. This year really could be theirs, and Harden will only get better as the games wear on.

They will need to make a few adjustments if they want to avoid a similar collapse to last year, though. For Embiid, the Cameroonian reckons it starts with having players who are willing to let it fly. He knows he and Harden will attract double and triple-teams in the paint and he’s expecting other players to step up and shoot the ball.

“Whether it’s my post-ups or the pick-and-roll, we’ve got to have willing shooters,” the center told NBC Philadelphia. “All the attention is going to be on me and James so when you create double teams, guys like Tyrese, obviously Georges (Niang), Tobias (Harris), they’ve got to be able to just let it fly. And it’s going to open up everything. I think it all goes back to spacing.”

Embiid also believes third-year man Matisse Thybulle could be the Sixers’ X-factor. Thybulle, 25, is already an excellent defender at NBA level and was named to the NBA All-Defensive Second Team last year,l. However, he doesn’t grab as much attention offensively.

The former Washington star’s teammate wants to see him shoot when defenders sag off him.

“Every time he’s open, I want him to shoot it,” Embiid added. “I see him work on his game every single day. He works on those threes. If they’re going to disrespect you, you’ve got to take it. And I believe that he’s going to make some of them. So that’s what I want him to do. He’s done a great job as far as cutting. And he still can be way better, but he just needs to keep on doing that and we’re going to find him.”

The five-time All-Star has urged Harden to help him create more spacing on the floor and find open players.

Philadelphia ranks 25th in the league in three-point shooting and also lost Seth Curry in the trade that saw them land Harden. Embiid intimated he would like to see his teammates take the wide-open threes.

"Teams come into the game obviously doubling and triple-teaming me," Embiid concluded. "Once we start making shots, then you’ve got decisions to make. Are you going to keep doing that; are you going to give up a bunch of wide-open threes?"

The Sixers, though, are a lock for the top four in the East and are only 2.5 games behind leaders Miami. Rivers will likely be tempted to give his starters a rest as the regular season comes to an end. It shouldn’t come as a surprise if Embiid or James, or both, are given a breather every few games heading into the playoffs.